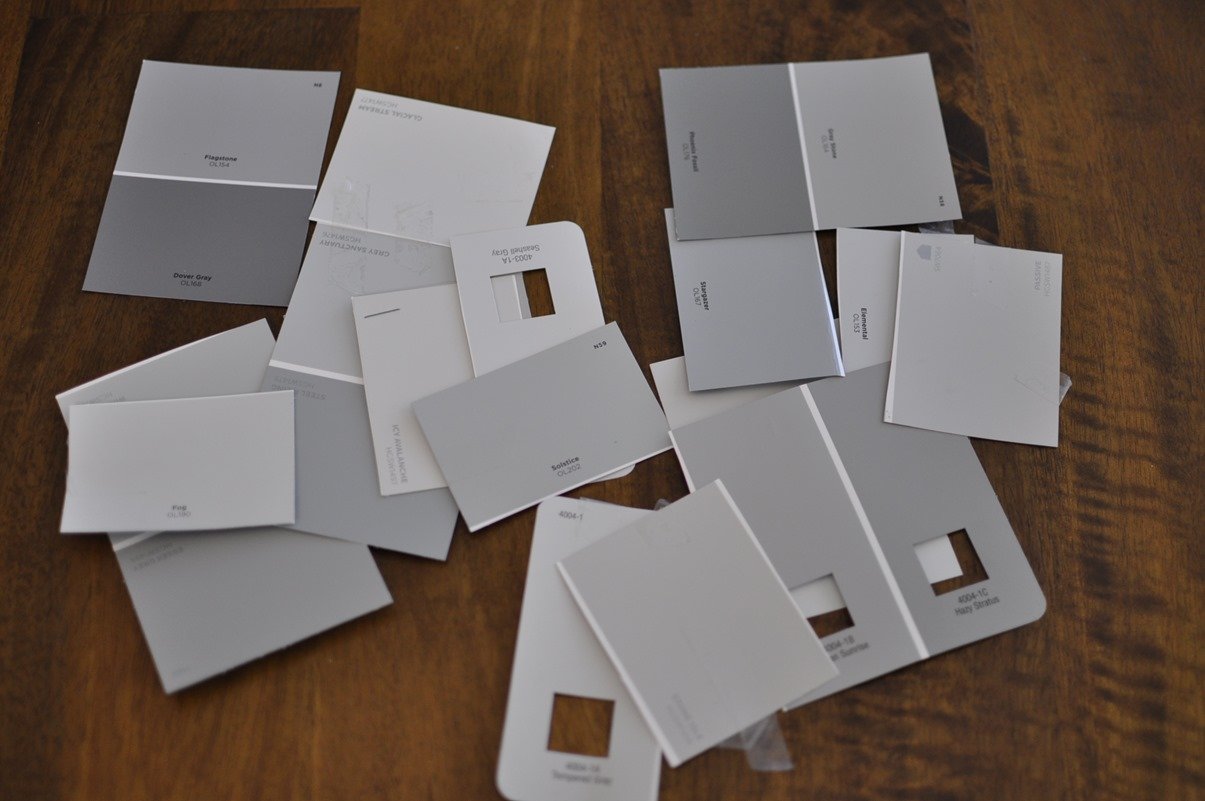 Hi all- I wrote this post prior to the tragic events in Las Vegas. The news is still unfolding but I am sending my thoughts and prayers to everyone affected.

Hi friends! HAPPY OCTOBER. I love fall in North Carolina, especially October. September can be so hot down here but October is when the temps finally start cooling off.

How was your weekend? Mine was full of painting!

Earlier this summer, I moved into my very first office after sharing one with a massage therapist for a few months. I found an office building with the perfect location but they didn’t have an office with a window, a must-have for me, available until October 1. They did have a different windowless office available at the time, so they let me temporarily move into the vacant one until my unit with a window became available on October 1. 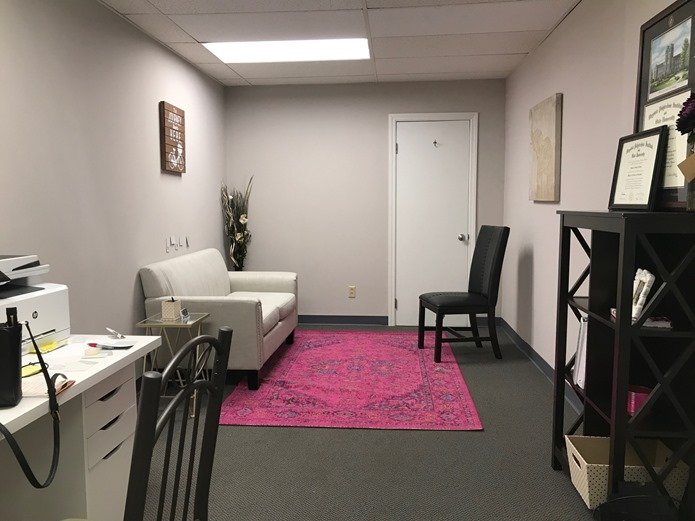 The entire office building is painted a warm grey color, but under the fluorescent lights it looked like a purpley-pink. The picture doesn’t do it justice. It looks more pink in person and honestly reminded me of vomit. I quickly grew to hate the color as did some of my other suitemates- they actually ended up painting the lobby bright purple, but that’s another story…. So anyway, I had decided a while ago that I would paint my new office prior to moving in.

Choosing a paint color was a bit interesting. I should start by saying that I’m the worst person at picking out paint colors. Every room I’ve painted has ended up looking completely different than what I’d hoped for, probably because I eyeball a few paint swatched in Lowe’s and pick what I think looks OK. So I wanted to do this the right way this time 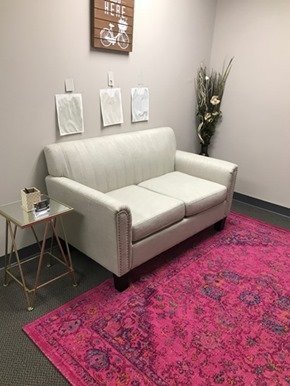 I knew I wanted to stick with grey but pick a color with a cooler tone. I thought going a few shades darker than my current office would look good, especially against my light grey couch, but I was trying to keep things neutral so that I don’t have to repaint when I move out. I only had a few days to paint and have my office furniture moved, so I tested out some paint samples prior to getting my new keys. 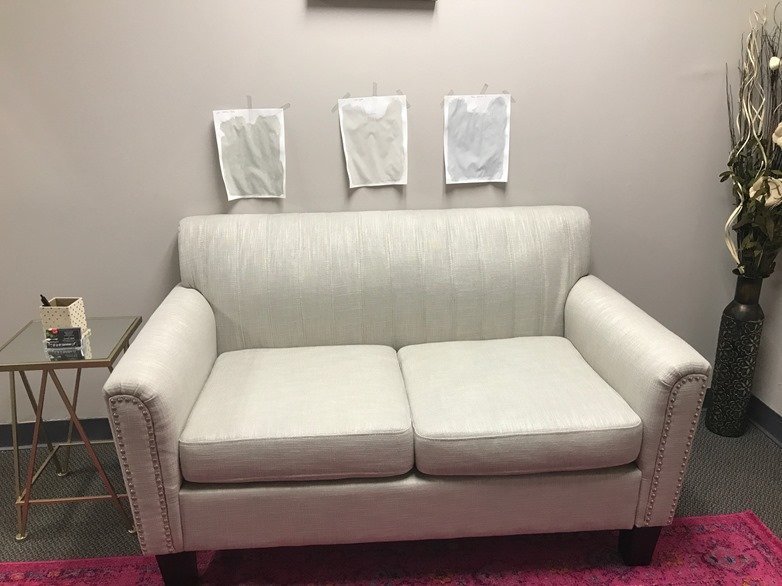 My initial favorite swatch was Passive because it was a pretty blueish grey and it looked good against my couch. But honestly, picking out paint colors was like a shot in the dark because all of the samples looked entirely different when I moved them from my office to more natural light. My plan was to go ahead and buy a gallon of paint prior to getting my new keys so that I could start painting the moment that I could, but I ended up waiting until I got into my new office to try out the real swatches on the wall. 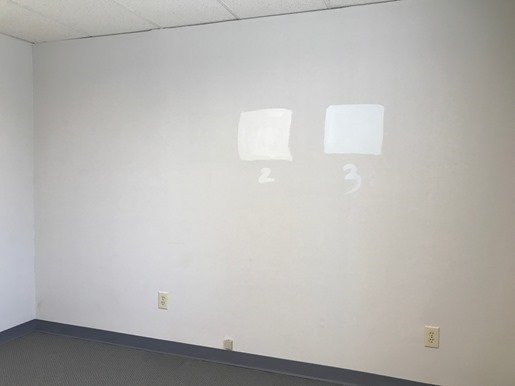 It’s funny how things looked SO different on my wall. My top choice #3 Passive actually ended up looking like baby blue. I thought #2 Seashell would be my second choice but it was too light. Out of the 3 colors, #1 Stone Isle became my new favorite (it’s hard to see in this pic) but it was a little more beige than I had envisioned. I ended up making notes on my swatches and going back to Lowe’s to try out a few new colors. The notes that I made were

It was very helpful to have the non-winning swatches with notes to be able to compare with potentially new colors. For example, I picked out a new blueish-grey color but when I compared it to the Passive swatch, it looked almost the same. I ended up picking out 2 new colors, one grey I just completely loved on the swatch but I had a feeling it would look purple on the wall. The other grey was similar to Stone Isle but just a little less beige. Here’s everything up on the wall. 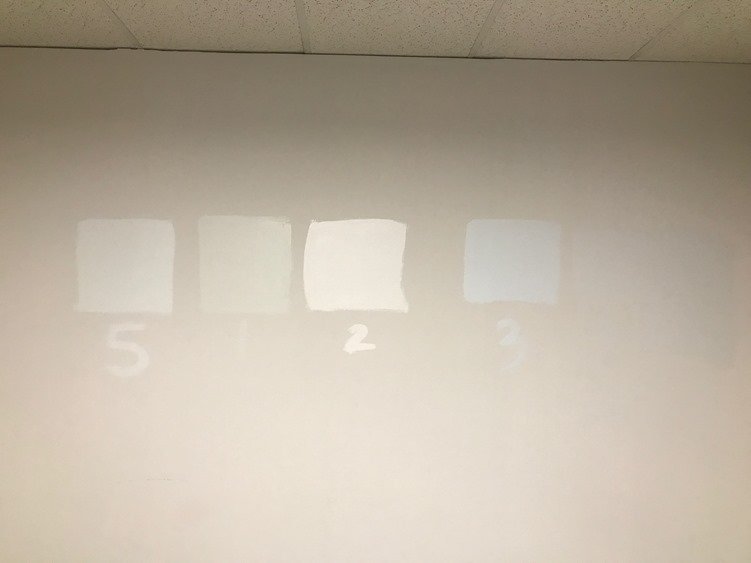 Tempered grey ended up looking exactly how I thought it would look and blended right into the old color. I went back and forth between #1 and #5 because the beige-grey really grew on me. But I ultimately ended up going with #5 Repose Grey by Sherwin Williams. 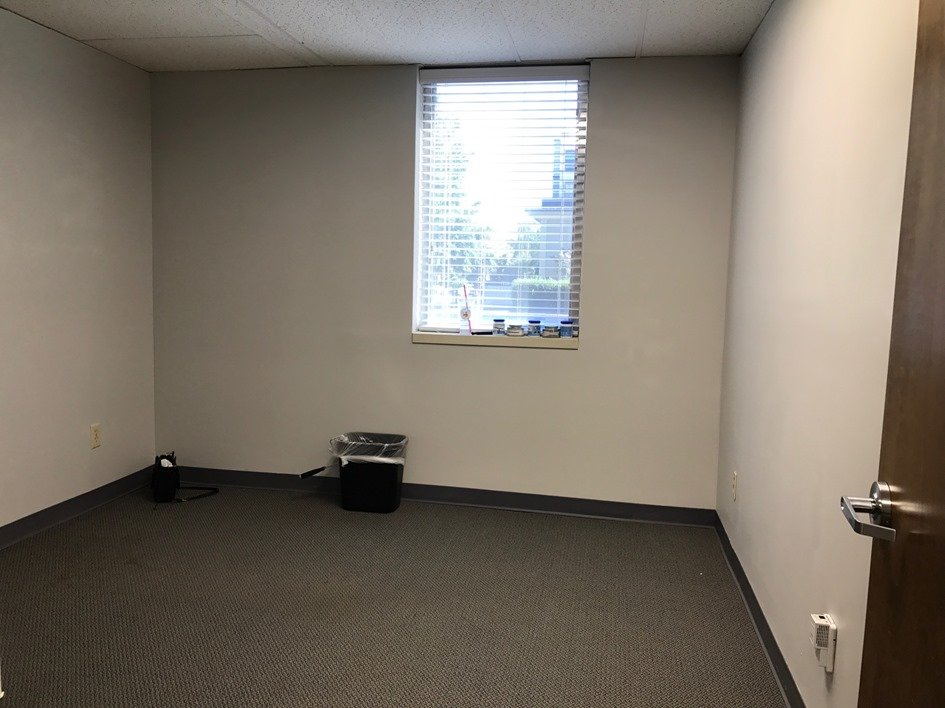 I’m really happy with the finished product! I know in the pictures that the new color still looks purple (and actually kind of the same as my old office) but in person the cooler tone looks so much better. It’s exactly how I hoped it would look. It’s also not a huge difference between the rest of the building and I doubt anyone will notice that I painted when it’s time for me to move out. I also realized that I have a light switch in my office so I can turn off the fluorescent light and just use lamps. I’m excited to get everything unpacked and settled, which will be happening ASAP since I have  clients today

Have a good day!

Are you good at picking out paint colors?

What did you do this weekend?